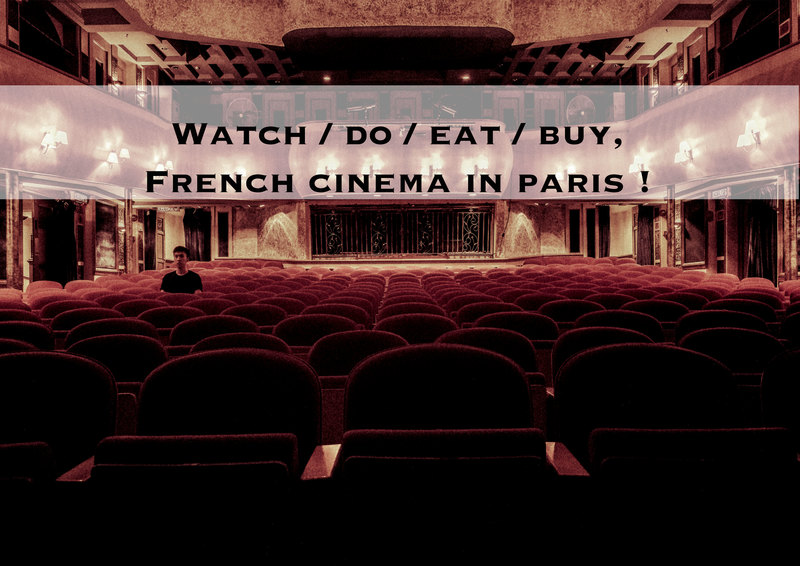 Jean-Lux Godard, the legend of French cinema once said that ‘Cinema is the most beautiful fraud in the world’. French Cinema, also known as the 7th Art among French people, is not only the birthplace of worldwide cinema but also influenced many art forms and cinematic movements for decades.

And here we have Paris, one of the most featured city in the films. The long history of French cinema is embedded in many parts of Paris. Today, Widetrip came with how to WATCH, DO, EAT and BUY French Cinema properly in Paris.

Only THREE days left until this awesome French cinema festival ends. For four days from 26th June to 29th June, ALL the tickets for the movies will be at FOUR EUROS ONLY. Across many Parisian theaters, you can watch any French cinema as well as Hollywood movies at this small price.

This Egyptian-deco-styled cinema was opened in 1921 and once a popular destination for silent French Cinema. However, after WW2, the cinema was closed to become a drug den and many other businesses such as 80s club or gay disco before it was abandoned for 25 years. In 2013, Louxor reopened as a cinema. You can watch both classic French cinema and other recent French movies as well as independent films at Louxor. It also welcomes visitors to its bar upstairs. You can have a glass of wine before entering the cinema and enjoy a view of Sacré-Coeur.

Enjoying French Cinema in Japanese garden is possible here in Paris. This oriental garden was built as a birthday present for wife of Monsieur Morin. And in 1930s, La Pagode became the unique Parisian theater that also welcomes visitors for afternoon tea at their café in the garden. Note that the cafe is not opened during winter nor when it rains. Lesser-known art movies including both French Cinema and independent films can be found here. Also, every Sunday, you can enjoy ‘Ciné Brunch’. As the name suggests, you will enjoy a movie followed by romantic brunch in the garden.

It’s FREE and it’s OUTDOOR in the park. The popular free open-air film festival is coming back this year without any disappointment. From 13th July to 21st August, one film will be screened each day except for Mondays and Tuesdays. The list of movies this year includes classic French cinema such as ‘Jour de Fête’ and ‘Les Demoiselles de Rochefort’ and recent hollywood movies such as ‘Drive’ and ‘Interstellar’. And if there is anyone keen for some Japanese animation and movies, you will be happy to hear that ‘The Tale of the Princess Kaguya’ by Isao Takahata as well as ‘Like Father, Like son’ by Hirokazy Koreeda will be screened during the festival. All the movies will be in original voice with French subtitles and deckchairs are available for the rent at 7 euros each. It will be screened at Parc de la Villette and this might become one of our favorite Parisian theater.

Think of Forum des Images as the biggest storeroom of of cinema, documentaries, animation, tv series and any other types of moving pictures. It was created in 1988 to collect French cinema and now, it has been almost 30 years since then and it has 4 screenings per day, more than 20 festivals every year including lecture and conferences with guest speakers. It features more of independent films and documentaries. You are also invited to ‘Académie’ the cinema debates with film industry professionals.

This hidden gem of French Cinema in Paris was opened its door in 1938 from the old bookstore. This old Parisian Theater was once the popular location to host some of the legends of French cinema such as Jacques Tati or Claude Chabrol. There are still only 2 screening rooms at Le Champo and offers a good balance of contemporary independent films and classical cinema. Also, check out their occasional ‘Nuits de Champo’ where you will be watching three movies in a row starting from midnight and ending the adventure with breakfast for only 15 euros.

Located in 6th arrondissement, the Latin Quarter, it is the place to go for some restored copies of classic as well as French cinema. Action Christine is also known as Christine 21, first opened in 1973 and it still plays films from 1980s. Also, the carriage entrance of the cinema is known to be from Louis XIV period.

You don’t necessarily watch a movie at Grand Rex because even without a movie, there are tons of things to be amazed by here. It is still the largest cinema in Europe since 1932 and listed as a historical monument. Guided tour of the cinema is available in French if you are interested to know the myth, architecture, decoration and stories behind this fabulous cinema. Also, audio-guide tour of the cinema is available for those interested in behind the scenes of the Grand Rex such as sound room, director’s office and even projection room.

* Or watch wherever you prefer

French Cinema may complete its presence if you could watch near Seine River or steps of Sacré-Cœur with your laptop. Although many films are downloaded online nowadays, it can be a great experience to rent one of the old DVDs of French Cinema and watch it at your favorite spot in Paris. ‘Cinebank’ is available in many locations in Paris or you can find some of the used DVDs in shops along Rue Saint-Antoine.

(Do the French Cinema)

One might say Paris has museums of everything. And among them, we definitely can’t miss Museum of Cinema when you are in the capital city of France. Musée de la Cinémathèque has simple yet strong objective which is to preserve and enrich French Cinema. It has more than 18,000 French Cinema posters, 10,500 costumes, 20,000 films and 450,000 photos from shootings. The museum also hosts many enrichment programs such as lectures and festivals. When you are done with the museum, check out the library within the same building which has one of the largest collection of archives of French cinema.

This is the perfect experience for fans of Midnight in Paris or any fans of Woody Allen’s work because you will get to time travel in Paris like Gil did in the movie. In the Latin Quarter, you will get to walk and feel what Gil had. This interactive walking tour will rediscover the stories behind the buildings and passages featured in famous movie of Woody Allen.

EICAR, the International Film & Television School of Paris offers unique summer workshops for anyone ever dreamed of making their own independent films. You can either participate in three-weeks-long filmmaking workshop or two-weeks-long screenwriting workshop. Both workshops are intensive courses for participants to learn through hands on experience of filmmaking and screenwriting. The workshop will be led by senior members of EICAR faculty and allows the class to be as small as 15 participants for more conducive learning experience.

It is a little pointless to watch a movie if you can’t talk about it afterwards. Well, there are a lot of meetups available at meetup.com for all the cinema lovers. For example, ‘The Paris Arthouse Film Club’ welcomes anyone refuses to watch hollywood films at multiplex. It is for the people who appreciate classical French cinema or any independent films to get together, watch a film and discuss about it afterwards. Or if you are interested to find out more about the film festivals and events, follow ‘Cinema Lovers’ for list of exciting events happening in Paris.

‘The 400 Blows’, ‘The Wild Child’ or ‘Day for Night’. Come with Widetrip today to relive the passionate life of François Truffaut. He is not only among the founders of the French New Wave but also one of the most remembered icon of French Cinema. This walking tour will visit his favorite neighborhood where he spent his childhood and also some of the locations where his famous films were born.

Ah finally! There is a mobile application for all cinema lovers visiting Paris. Cinemacity application will be able to locate all the spots in Paris where traces of French Cinema or Hollywood films remain. Once your location is found by the application, it will show the places near you where films have been shot. You can read some texts, see photos and even watch the videos of the films from that location. Also, there are list of walks made or suggested by the application. The application is available in French, English and German.

Don’t miss the exhibition of Blue Sky Studio at Musée Art Ludique located in 13th arrondissement. ‘Ice Age’, ‘Rio’ or ‘Robots’ are some of the films featured in this exhibition. You will get to see the very fist scribbles of the films to drawings, videos and interviews of the designers. You can explore in detail how animation films from Blue Sky Studio were made and appreciate the art, design and passion behind the making of animation films.

This tour follows the traces of great names of French Cinema such as Hepburn, Chanel and Astaire. Around Opéra, you will discover the traces of these names in places such as hotels, shops, squares and museums. Being where these people have been at might inspire you at whole new level so come with us today to enjoy a little walk of fame.

This is one of the hidden gems of French Cinema scene. The cafe located within Studio 28 cinema, one of the most popular art-house Parisian theater, is the must if you are up for an afternoon drink or goûter. Once you walk past the ticket office of Studio 28 cinema, you will be greeted with unexpected interior courtyard decorated with black and white photographs. It is not only famous among visitors of Studio 28 cinema but also for afternoon tea and aperitifs among Parisians.

It is located within Cinema de Cineastes in 17th arrondissement. All decorated in ambience of 1920s film studio will bring you back to one of the scenes of French Cinema. The menu changes every season and dishes follow the themes of movies selected for the season. You will rediscover classic films from 1930s to recent art films in their dishes at very reasonable prices.

This is the places to go for when you are looking for movie posters. We are not talking about posters of Avengers or X-Men. We are talking about posters from as early as 1930s. Since 1975, Cine-Images was the places to be if you couldn’t find the posters of your favorite French Cinema at big store like Fnac. The collection of both movie posters and photographs will surprise you.

Also, if you call yourself as Cinema lover, you might be interested in Impressionism movement of Art. Check out Widetrip to Impressionism to see how Impressionists painted Paris and how these locations look like today.

Must visit cafes in Paris